Arizona - the not so fun part

One morning as I was getting up really early to get ready before all the little people started waking I received terrifying news.

Scout, my 5 year old niece, fell from the second story window onto the cement driveway.  She was rushed to the hospital.  I can't even imagine what it must have been like for Noelle to walk out and find her daughter like that. (I took these pictures from Noelle's blog.) 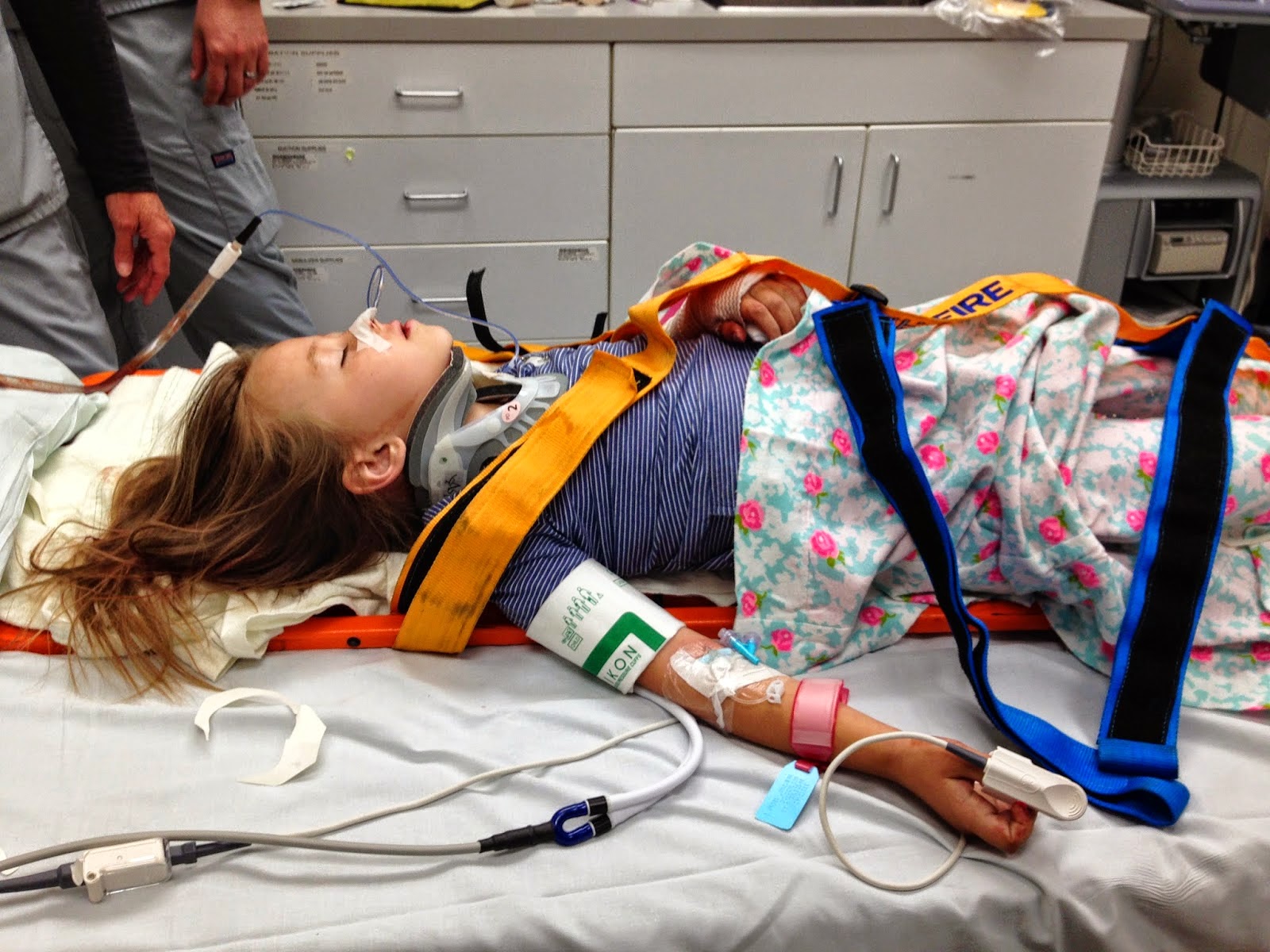 As I laid there, in that early morning, I felt like I couldn't breathe.  I was completely panicked just waiting on every piece of information I could.  I wanted to be there.  I wanted everything to be OK. I prayed.  I prayed for Noelle, for Scout and for her family.  All I wanted to do that morning was hold my kids and my phone real tight.  Trials affect the person involved. but it's like they make a large ring out.  It affects many people in different ways.  I truly was impacted by the love and support my friends gave me to show their support for Noelle and her family.  This experience gave many a way to show God's love.  As the days went by, and many prayers were said, Scout started to recover.  Faster than anyone could even hope.  The left side of her body was completely fractured.  From her eye orbit, spleen, fractured wrist and hip -everything was going to be OK. 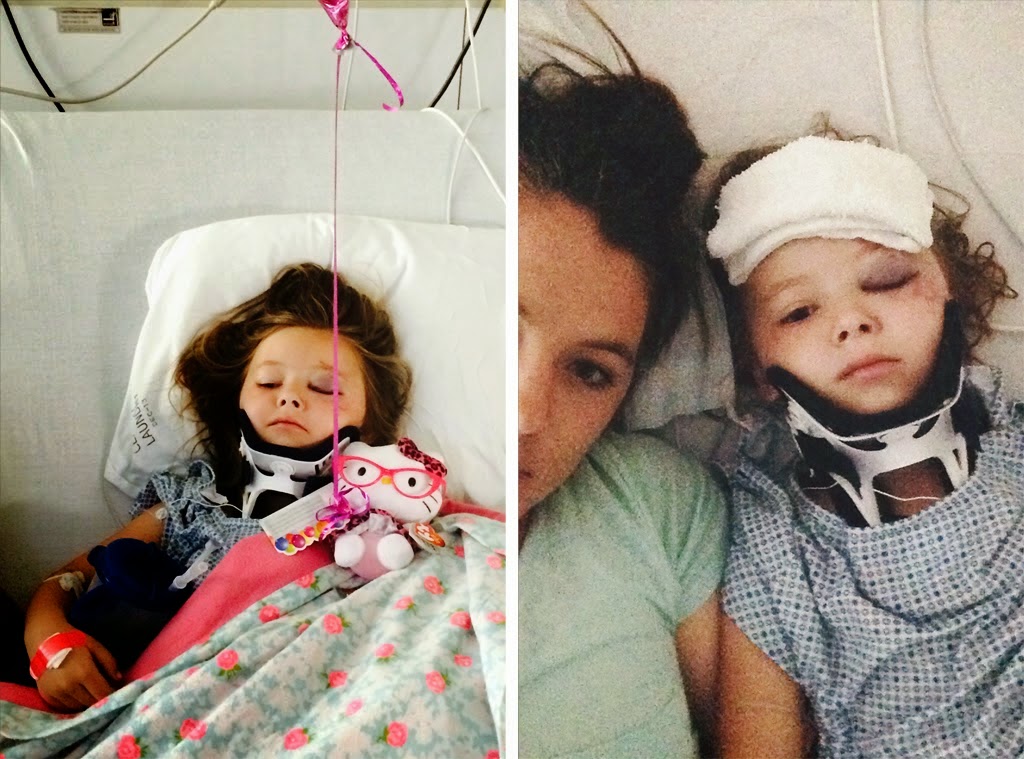 Scout, after a long while, started to remember the events and she told me one day.  She was very brave.  She remembers falling and holding on the the "black thing" and when she couldn't hold on anymore she said she hit the ground.  We are so blessed to have her safe and sound.  This was nothing short of another one of God's miracles.  He is so evident in my life and I can't explain it any other way. Scout was soon on her way home to heal with her family. 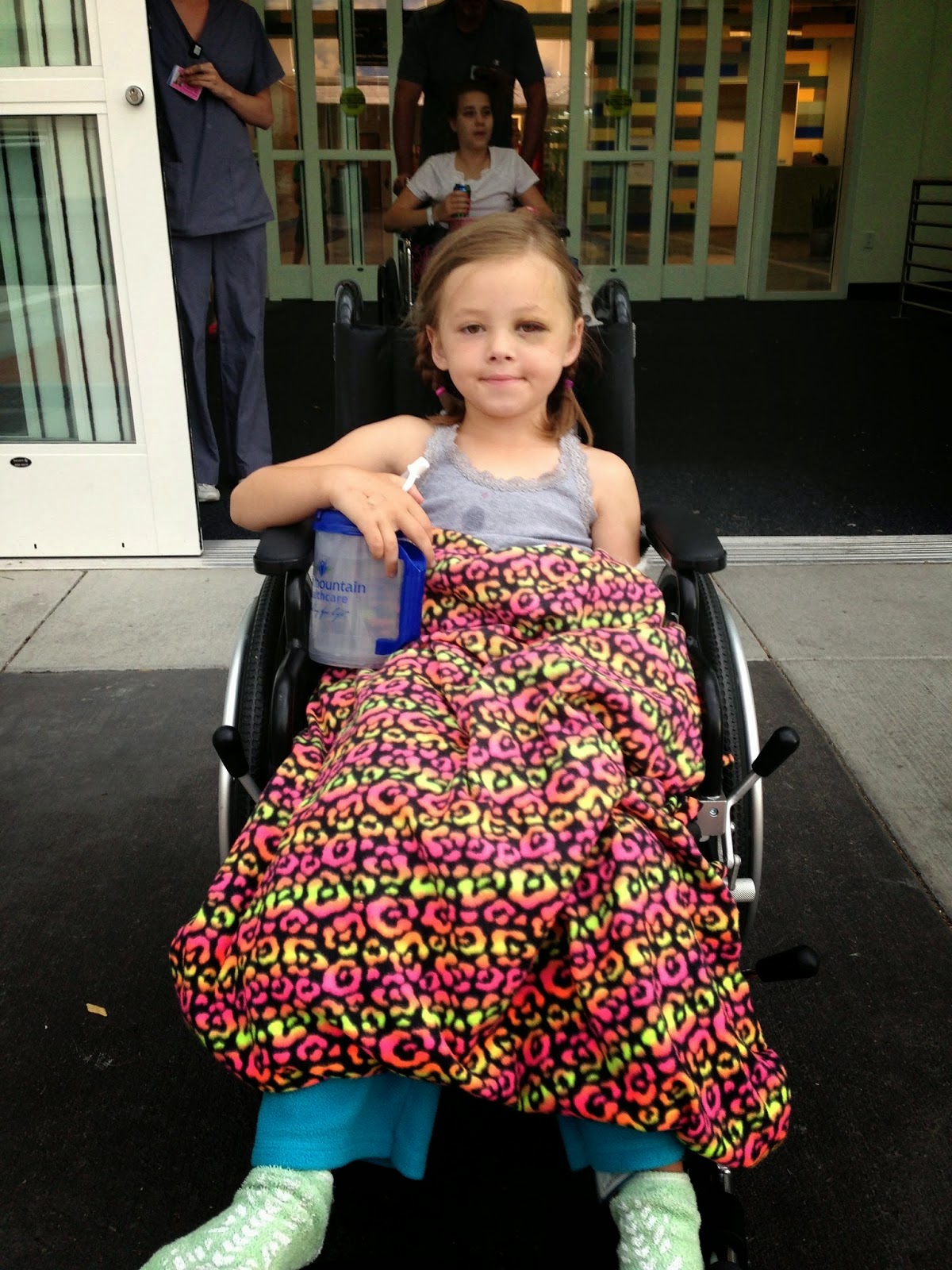 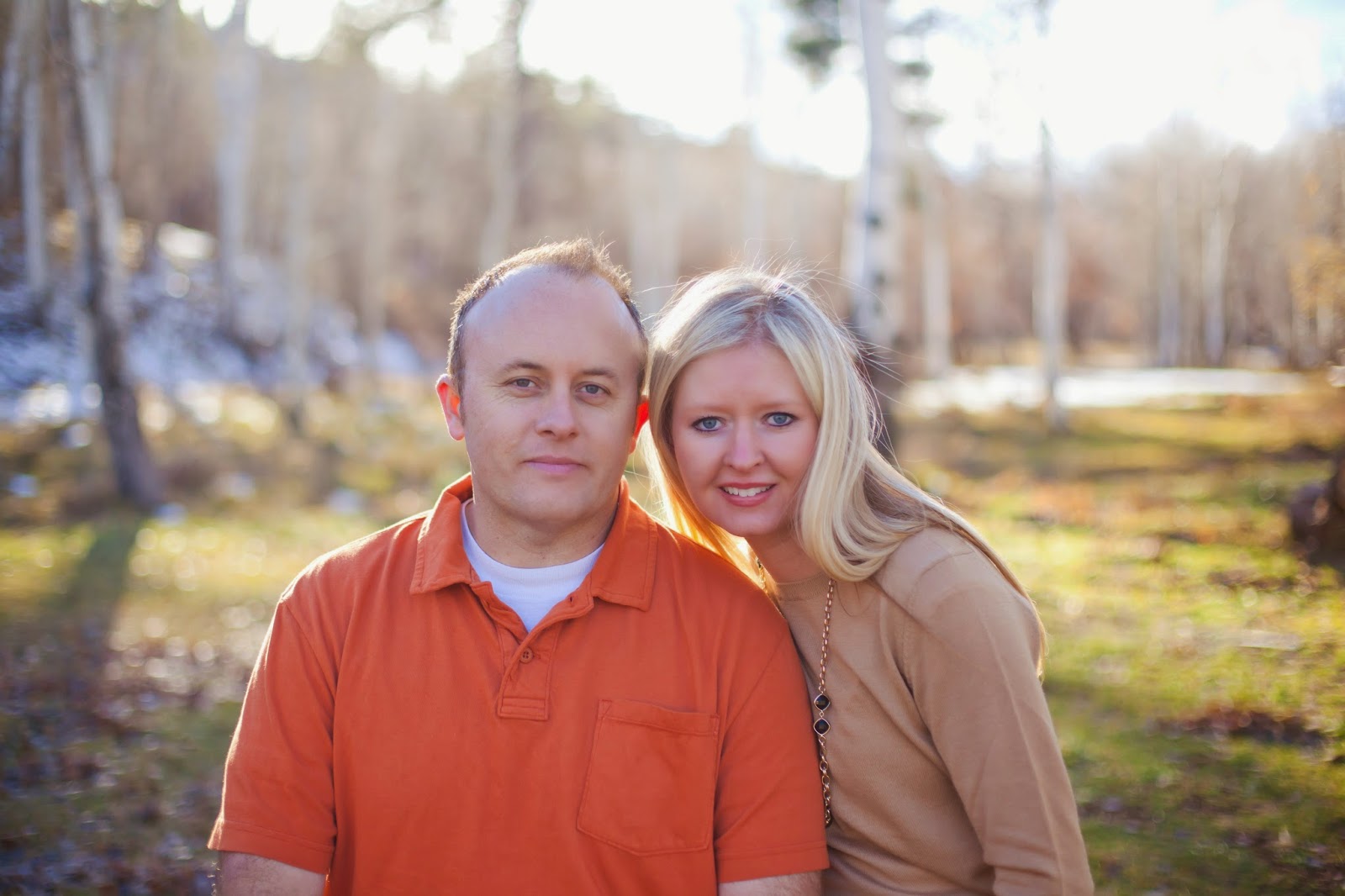 As if this week hadn't been emotional enough, I finally got to talk to Huntsman's Cancer institute.  The news wasn't what I hoped for.  30% of Jeremy's cancer cells were non-snoma cells that transferred up through his blood and possibly have spread into his lymph-nodes.  A few of his nodes were larger than normal, possibly due to cancer.  Dang it.  The weight of everything was so heavy on my shoulders I could actually feel the weight.  The only way I could get through all this was to turn it over to Heavenly Father.  It's hard.  Jeremy was doing awesome.  It just didn't seem like this could happen.  I spent many nights talking to Jeremy.  He was so much stronger than me. You see, the worst part about cancer isn't the cancer itself.  It's the waiting between tests, the surgeries, and just telling people.  It is a step by step process that you just have to go through,  By this point I had planned Jeremy's funeral 5 times.  I was a mess.  I wouldn't sleep at night and found myself waking up in tears.  Till one day, my dear friend said, "Heather, you can live in fear or have faith."  She was right.  My prayers then changed and Heavenly Father and I carried the weight together.  This was all going to be OK.
Posted by Heats at 3:07 PM

A happy family is but an earlier heaven. -- John Bowring

Little girls, like butterflies, need no excuse. -- Robert A. Heinlein

A boy's story is the best that is ever told. -- Charles Dickens

A small son can charm himself into, and out of, most things. -- Jenny de Vries

2/14/14
Mom: You have never heard of Cupid? It shoots arrows of love.
Coy: That's weird. I loved Kessia before I got shot by love. Cupid wears a diaper? It's not cupid the reindeer? I like Blitzen the best cause I just like the name.

1/15/14
Mom: Cohen why are you sneaking food to your room. I don't like sneaking.
Cohen: It's hard to break the habit cause I watch too many ninja shows!

8/25/13
Cohen: My favorite store is Maverik. It smells soo good in there. What's your favorite store?
Mom: Nordstrom
Cohen: What's that?
Mom: A store at the mall.
Cohen: Oh! That's my 2nd favorite store. I love their pretzels.
(oh my kids are rednecks)

5/27/13
Olivia: Mom, you always exaggerate the time! It bugs me! Like when you say you will be right back, it takes an hour!!
Mom: Oh really?

3/20/13
Olivia: Mom, did you ever have imaginary friends?
Mom: I am sure I did.
Olivia: I want them, I just keep forgetting about them.

2/20/13
Cohen: Mom, can I have a snack?
Mom: Yes, just a second.
Cohen: You really get mixed up between a second and a minute. Did you mean a minute cause a second would be like...right now.

10/21/12
Cohen was whimpering because he missed his dad.
Coy started singing VERY quietly...
"If something is bad, turn it around and find something good and then you feel better."
Cohen: Well, dad is bringing me a treat when he comes and I get to be with my mom.
Then both boys were happy.

10/10/12
Coy: Mom, will you sing me the Santa Claus is Coming to Town song?
Cohen: Please don't. When I hear that song it makes my tummy hurt that I am going to get coal.

10/7/12
Cohen: I love Halloween because nobody is watching you. Like Santa and the Easter Bunny only give you stuff if you are good. Halloween you just get stuff!

9/2/12
Coy wanted soda. Noelle had soda.
Noelle: Who's your favorite aunt?
Coy: I like the red ones.
Coy got soda anyways!

8/29/12
Palmer (1 year old) kept trying to hold on to McCoy while she was standing up and it was pulling down his pants. I tried to tell him to be patient with her because she wanted to stand and he said: NO!! She just wants to put her finger up my BUTT!

8/27/12
Coy woke up early and came out and watched Jeremy and I work out. He was quiet for a long time looking from the TV back at us then finally he said: Mom, you aren't doing it right.

8/18/12
Cohen: I think I will keep you as my mom. What other mom would let me get a vegetable tray at the grocery store?

7/26/12
Livvy: My hairy legs drive me nuts!
Mom: You don't have leg hair!
Livvy: Oh yes I do, things get stuck in it all the time.
Mom: Live what?
Livvy: Like twigs and leaves and stuff.

7/25/12
Cohen examining Coy on his birthday.
Cohen: Coy sure doesn't look any bigger.

7/22/12
Livvy: On "Harriet the Spy" one girl said she was growing boobs all summer. What is so exciting about that??

7/11/12
Dad: Coy, you need to pick up your blocks and put your toys in your room.
Coy: Blah Blah Blah.
Dad: Did you just say Blah Blah?
Coy: Yup. Blah Blah Blah

Cohen: Guess what I just did?
Mom: What?
Cohen: I said a prayer. But Jesus really doesn't help us pick up our toys. He just tells US what to pick up first. Is that good mom?

6/24/12
Mom was walking Coy out to go to the bathroom from sacrament. When walking out Coy spotted the missionaries.
Coy: HEY!! I didn't know the missionaries go to church?!?!

6/19/12
Mom: Mason has just had a bad day crying!
Cohen: Did you feed him at all the right times?
Mom: Yes.
Cohen: Maybe you should feed him again.
McCoy: Yea, because if you don't he will be sad all the time.

6/12/12
Livvy:There was litter in the duck pond so I got it out. (she jumped in a SICK duck pond in swam over her head to get a cereal box out.) Livvy hates litter but that is just gross!!

6/10/12
Livvy: How come you say crying doesn't help but when Mason cries he gets what he wants?

5/30/12
Cohen: Grandma, is Grandpa going to be home when we go to your house?
Grandma: Yes, I think he will be there for lunch.
Cohen: Good, cause I want to play his IPad.

5/25/12
Mom: I don't want you to throw any fits during Father's and Sons.
Cohen: I won't. Cause if I throw a fit I usually lay down on the ground and I do not want to get dirty! If I throw a fit, I will do it in the tent.

5/22/12
Mom gave Coy 2 starburst.
Coy: Can you open these and make sure you put the garbage in the garbage, OK?

5/21/12
Cohen: Why is it called T-Ball?
Mom: (Stumbling to think why) because of the stand I think...
Cohen: Oh I know! Because of the the Tea. You know when you pour the tea into a cup?
Mom: aa.... (Cohen then walked out satisfied of his answer but I was left confused!)

5/2/12
Livvy was showing Mom how to put the Binky in the baby's mouth to stop him from crying.
Livvy: I can't believe I know how to do it better than his own Mother!! I am soo good at it!

4/10/12
Stephanie and Tiff (moms friends) were over. Livvy did not want to go to bed so her compromise was:
Livvy: Could you just turn the volume up on your talking so I can hear you better?

4/9/12
Cohen: Don't you think it would be boring to only drink water all day?
Mom: I like water. It's really healthy to drink it all day.
Cohen: Well, it's just boring.

3/29/12
Cohen: I wish I had magic powers so I can control you.
Mom: Oh yeah?
Cohen: Yeah, like you I would make you cuddle with me all day and play with me.

3/16/12
During Scott's Dad wedding speech Cohen was told he couldn't have cake until he was finished speaking. So Cohen went up and tapped him.
Cohen: Are you almost done?
Scott Dad: Yea.

3/15/12
Livvy: One time I brought an ant I found in your room to show dad and I accidentally dropped in on your side of the bed and we couldn't find it. Dad told me not to tell you.
Mom: You just did.

2/27/12
Livvy: Dad, remember when I found an ant in Cedar Hills and I showed you and while mom was at YW and I dropped it in her bed and you told me never to tell her?
Dad: You just did.

2/11/12
Mom was watching Vampire Diaries. (don't judge)
Mom: Livvy, I am watching a mommy show with Vampires can you go find something else to do?
Livvy: How are they vampires?
Mom: (pointing to the screen) He turns into a vampire.
Livvy: Does his mom know?

2/9/12
Mom: Do you want a strawberry or chocolate shake?
Cohen: Strawberry. I do NOT want another cavity!

2/7/12
Cohen: Mom, I think they should change Winnie the Pooh's name to Winnie the Bear because Pooh is like poo... and that's kinda sick.

2/5/12
Coy picked out a green tootsie roll for Cohen while Cohen was at preschool. Coy wanted to hold it for 3 hours while Cohen was gone. After an hour Coy took the wrapper off.
Coy: But I am not gonna eat it. It's Cohen's
30 minutes later... He flattened it into a pancake "for Cohen." BUT he still was not going to eat it.
30 minutes later... I caught him licking it. But he still said he wasn't going to eat it. Then he just shrugged his shoulders and said, "I'm just going to eat. We can get Cohen another one!"

1/11/12
Mom dressed Livvy today with fancy clothes and fancy hair.
Livvy: This girl at school told me I look like a movie star that should be on T.V.
Mom: Oh that's nice!
Livvy: The thing is sometimes when I look in the mirror, I think the same thing!

1/5/12
Cohen: Were you scared at night, Dad?
Dad: Not really.
Cohen: Really? What kind of flashlight did you have?